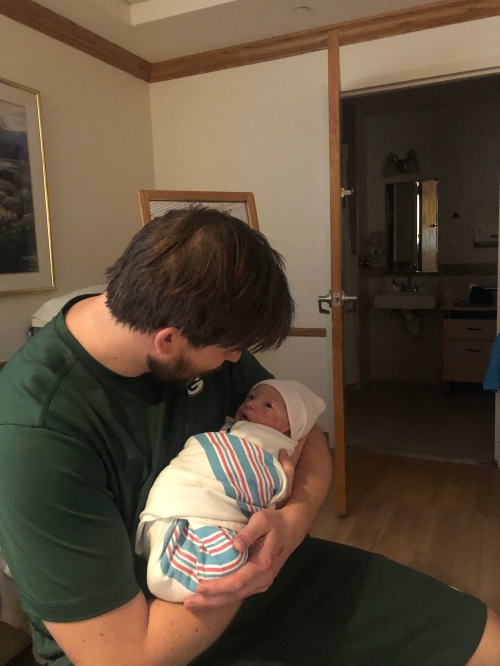 Well, looks like Grizzly Chadams finally grew up a little bit and became a papa bear. To say the least, it’s been quite an adventure getting to this point, and having this been our first child, my wife and I had different thoughts as to how the birth would go.

She had it in her head that induction and labor would go a little like this:

While I certainly had my expectations…

But 36 hours after the induction, this is pretty much what we got:

But low and behold, eventually a baby came out of the womb.  And thanks to the nurses’ orders, good ol’ Grizzly Chadams got a front row seat for the entire ordeal.  With that came several emotions, the first of which being, “Jesus Christ!  That’s a giant baby!”  I mean, I could see the top of the head, then all of a sudden, “WHAM!”  Out came the rest of the body!  “How in the world did that thing fit inside my wife’s body?!” Even she swore that by the end of it, the aftermath of his birth was going to look a little something like this…

Sorry, a little graphic, I know, but that’s what inevitably comes to mind after 3 hours of active pushing!

It didn’t take long however for a sense of fear strike through me.  Right from the get go, I expected to hear a crying baby, just like the ones you see in the movies, something along the lines of a “Hey, what the hell, man?  I liked it in there!  Put me back!”

What I got instead was complete silence.  The doctor’s sudden decision to deviate from my originally planned cord cutting duties was also cause for concern, coupled with the group of nurses hovering over the intensive care station, ready for action.  And I’m sure in one of those “new parent” classes, they told me the baby would have a bit of a deformed head when it came out.  But of course I forgot about that, and naturally, I panicked!

We were told during the whole process that the baby had Billy’s Ruben or something of the sort, and that he immediately needed to be placed on oxygen among other treatments.  Now, I won’t like, upon first hearing this, I was a bit impressed.  The fact that he snatched this guy Billy’s Ruben Sandwich had me swelling with pride.  Right out of the womb and he’s already got the upper hand.  “That’s my boy!” I wanted to shout.  “Way to go little Z!”

Then, it got me all irascible.  Like, “What the hell, Billy?  What’s a grown ass man doing leaving such a fine cuisine out within snatching distance from a little baby boy?”

After further consultation from the doctor, it turns out that there was no Ruben sandwich, and apparently, it has nothing to do with a guy named Billy.  Wikipedia may have had some answers, and a quick internet search revealed that it’s actually called “bilirubin” for some reason. I tried looking into it a bit more, but there was just too much scientific mumbo jumbo for me to make the connection (they talk about all these different chemical bonds and stuff, and you know I barely made it out of Organic Chemistry alive!).  I’m just glad the little guy got out of it safe and sound.

But in those few of moments fear and confusion, where the health of my baby was in question, I was overcome with grief, if only for a moment.  “What happens if he doesn’t pull through?” I thought.  “All the work the doctors put in, the machinery to monitor my wife’s and baby’s status, the drugs to relieve the pain of child birth, the equipment required to induce labor, all the work my wife put in, the 36 hours of labor and 9 months of pregnancy and sacrifice that was made on her part all in preparation for this day…  What if it was all for nothing?”

I got to think that because of his innate Grizzly bloodline, he pulled through with flying colors.  But once the chaos settled, I was struck with a revelation.  Up until then, a birthday was an excuse to party and an opportunity to score on some awesome presents (i.e. Nintendo 64 at 12 years old… I’ll never forget that one), along with a few milestones along the way.  Age 13, you become a teenager and start getting hair in weird places.  Age 16, you’re legally allowed to drive.  Age 21, it becomes socially acceptable to drink alcohol, and so on and so on.

The moment I saw that baby in the flesh for the first time though, everything changed.

You see, we all started where he did, just a little human entering this enormous world, scared, confused, and utterly helpless.  The smartest minds that had ever blessed this Earth, Einstein, Sir Isaac Newton, and Nikola Tesla, to history’s most renowned artists, Michelangelo, Shakespeare, and Mozart… all of them were in his exact position at one point in their lives… and all of em’ had a level playing field.  Michael Jordan and my boy Aaron Rodgers?  Those guys were babies once, small and feeble just like him before they became the greatest sports heroes of all time.  And let us not forget all those great figures in American History who changed the world… George Washington, Honest Abe, Martin Luther King…  Yep, they were all babies too.

And what about my man Kanye Freaking West, aka the greatest of them all?!?!  He was there, cryin’, and burpin’, and poopin’ in his pants just like the rest of us!  He had to go through the same ordeal, develop from a helpless infant with no means of self-support into the greatest of all time!

At one point in time, they were all just like my son.  And just like them, he has a chance to change the world.

And how wonderful it is that we take time to remember that once each year?  To remember the miracle of life and the blessing that occurred on the day of his birth?  It turns out that a birthday is, and has always been, a much more significant day than I had ever realized, more so than I could have ever have imagined before the birth of my son.

And it was during that moment of respite in the hospital, after the silence and the scary thought that all had been lost, when I realized the opportunity before me.  As his father, I have an amazing opportunity to shape him into the best person he can be.  I get to watch him learn how to crawl, walk, talk, throw a football, do a kickflip on a skateboard, and grow into a man.  And together, we get the opportunity to celebrate that all of that, year after year.

So, to my newborn son, I leave you with this…

It is a day of remembrance.  A day to reflect on nine months spent inside your mother’s womb.  It is a day to remember the nurturing, hard work, and sacrifice that took place, all in preparation for your delivery.  The hours spent in pain and labor, risking one’s life to ensure the sanctity of another.  A day to remember, after all the anguish, discomfort, and sleep deprivation, the overwhelming joy of seeing your face for the very first time.

It is a day of triumph.  That against all odds, you developed from a few cells into the person you are today.  It is a reminder, a living example of the miracle of life.

It is a day of reflection.  We reflect on your greatest successes, the lessons you’ve learned from your mistakes, and the times you fell, only to pick yourself back up again and continue the fight.  We reflect on the person you’ve become, the progress you’ve made, and the endless opportunities ahead of you.

It is a time to remember that on that day, the world would be forever changed.

Your birthday… the day you entered the world.  The day you forever changed our lives.  A day of intense pain and depleted energy, exerted for the sole purpose of giving you life… a day to remember it was all worth it.

So, for that, we celebrate.  Because above all things, the day of your birth is one worth celebrating.